OpenFMB PlugFest 2.0 is a Success

The OpenFMB Message Bus (OpenFMB) standard was ratified by the North American Energy Standards Board for grid energy interoperability and a key enabler for distributed intelligence in electric utility power systems initially in 2016 and then again in 2020.​

The second OpenFMB PlugFest was held at the Duke Energy Mt Holly facility in North Carolina, October 2022. Organized by the Utility Communications Architecture International User’s Group (UCAIUG), many vendors and utilities participated and demonstrated that the new OpenFMB v2.1 could be successfully used to exchange messages among edge devices and applications. The significant update to the OpenFMB v2.1 was the addition of the grid codes model for managing distributed energy resources (DER).

Xtensible Solutions has been a key part of the OpenFMB task force and has been responsible for leading the modeling task since 2016. Recently, the modeling team has been working on the DER grid codes for version 2.1. Following the top-down business driven modeling approach (see right), the grid codes from IEEE1547 have been added into the existing model profiles such as the ESSControlProfile. 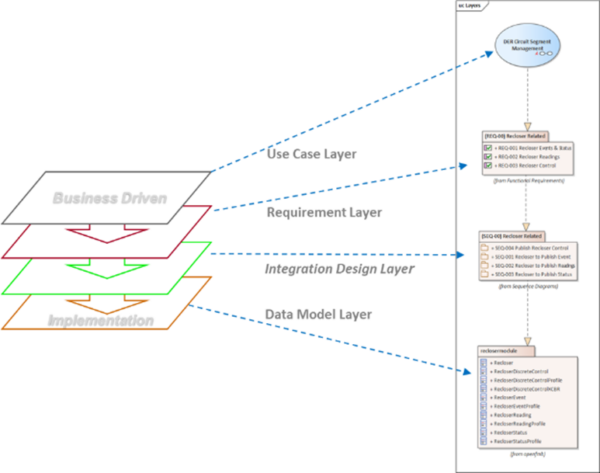 The model change is backward compatible to minimize the impact to previous implementations. Using ESSControlProfile as an example, the existing curve point, ESSPoint, was extended to include IEEE1547 Grid Codes curve points such as VoltVarPoint and WVarPoint. Another update to the OpenFMB v2.1 is to include capability profiles for selected device types. This allows applications to query an edge device for its nameplate and rated information.

“Building a data model based on business requirements provides a holistic view of data lineage and data governance which reduces everyday complexities for developers and analysts.”

It allows impact analysis from both top-down and bottom-up. Each OpenFMB data profile can be traced from a use case or a particular business requirement. Vice versa, a change in use case can be traced to a data model for potential model update.

Both UCAIUG CIM, which is the data model that supports International Electrotechnical Commission (IEC) standards 61968/61970/62325 and the 61850 standard and data model, are the foundation to build the OpenFMB data model. The CIM provides a mature messaging data structure for OpenFMB profiles, and the IEC 61850 offers detailed device attributes. OpenFMB is a good example of harmonizing CIM and 61850 standards. Following the concept of the harmonization, a common semantic model can be built and then extended as necessary. The Logical Node (LN) classes in the IEC 61850-7-420 have been utilized to form relevant OpenFMB data profiles such as Solar and Energy Storage System (ESS) profiles.

All 15 OpenFMB data profiles are defined in a consistent way following a design pattern in unified modeling language (UML) as Platform Independent Models (PIMs). The same PIMs can then be physicalized into multiple Platform Specific Models (PSMs) such as ProtoBuf, IDL, and XSD. This process is known as “model driven development”. The PIMs also provide semantics for each module in terms of definitions, relationships, and so on. The OpenFMB framework has been matured for certification in recent years.